Biology is wet and messy. However, many biological systems manage to organize in amazing ways. In the first part I discussed (some) cells of the immune system. Cells alone do much but this doesn’t answer how they organize. Key component of a supracellular (among many cells) organization is communication.

You don’t see large organizations without talking to each other. Key for a successful organization is communication. One of the main functions of the immune system is to organize correctly and specifically to each type of pathogen. After all, you can’t clear a viral infection the same way as you clear a fungal infection. Different mechanisms are required. Let’s learn how cells of the immune system communicate.

Communication can be seen as information transfer. Somehow cell A is in a state. But then cell B transmits a signal, which cell A can read/detect. This changes the state of cell A. 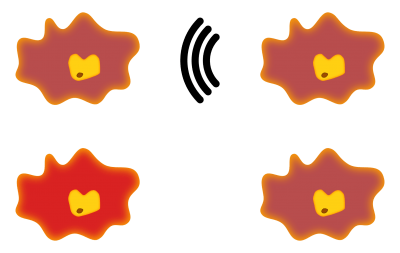 There are many mechanisms how this happens and they can get really weird very quickly.

Cytokines are molecules, which cells secrete (release) into their environment. These are usually small proteins. Some cells may have a receptor to detect them. Receptors are like sensor for the cells but made out of proteins. They are usually on the cell surface and their target ligand (the molecules, which bind to the receptor) binds and changes the receptor structure. This change can results a signaling cascade within the cell. We are diving too deep here but most important thing to know is that proteins bind and modify each other in different ways like a signal travels within an electric circuit between components. Eventually, this signal is somewhat processed and causes changes in the cell. For instance, a genetic program is activated. For programmers you can imagine this like the following:

One device broadcasts a WiFi package. WiFi enabled devices catch this package and calls a function in the device. This function does something and calls another function. A cascade of functions get called. Eventually, the device starts to play your favorite music.

Cytokines are like a broadcast to the environment. They can reach only local environment or whole body. That is how an infection can be reported to bone marrow. The bone marrow responds with increased production of immune cells. Amazing isn’t it? It’s the cells’ way of saying “we need backup!”.

Chemokines are special kind of molecules, which helps the cells to find their direction. Again, biology is a wet and messy place. Cells can easily get lost. But we mentioned earlier that DCs need to find the lymph vessels to travel to lymph nodes. How do they find them? How do cells navigate? Well, that is thanks to the chemokines. Chemokines are also secreted by other cells. When they get released, they can form chemokine gradients. Even though, these gradients may be very shallow, cells integrate the signals from their environment to find minuscule differences and follow these gradients. This is quite interesting in many ways, because it is unclear how exactly cells can integrate the signals in order to perfectly navigate the environment. Often, in digital communication we rely on high signal/noise ratios, so that our bluetooth headphones work. For cells, it isn’t that easy. A cell can extend 10-50μm (micrometers, a micrometer is 1/1000 of a millimeter). The concentration difference can be really low between the front side and the back side of a cell. But it there is too little difference, the cell may not now where to go. 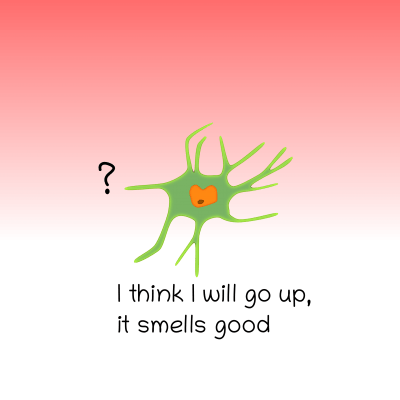 Some cells even eat up the chemokines to prevent other cells following them. Others leave trails for other cells to follow. 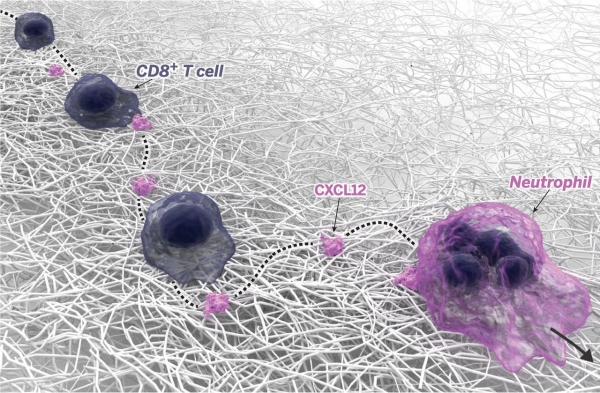 We are still trying to understand, how cells actually manage to integrate the signals provided by their receptor (sensors) to figure out subtle differences in concentrations of chemokine.

There is a long list of chemokines. Some are grouped depending on the aminoacid sequences (molecules which make up proteins). Some of these are expressed (produced) in normal healthy tissues but some of them only during inflammation. Inflammation is a process of complex biological reactions to harmful stimuli. We will use this in the context of infections and autoimmunity. Chemokines are sensed by the chemokine receptors. A cell can express many different chemokine receptors. Many chemokines may be sensed by a receptor or also many receptors may sense the same chemokines.

For instance my research group works (not only) on CCL19 and CCL21 chemokines. These chemokines are also expressed in healthy tissue. Dendritic cells after antigen uptake sense these chemokines to traffic to lymph nodes. CCR7 (chemokine receptor) senses both of these chemokines. Tissues are dense places with lot’s of fibers (e.g. collagen) and other cells. Migrating cells have to squeeze their way through this complex environment to find their destination. This is particularly important during an immune reaction, as this is usually localized. Like police arriving and encircling an area of criminal activity, similarly immune cells use chemokines and cytokines (emergency call!) to find the location and react to the activity. There are first responders (neutrophils), helpers (T cells) or even investigators (DCs)! Then there are macrophages, who clean up the mess.

Where is the nut? (Ice Age)

Ligand/Receptor pairs are the close communication between cells. This is similar to two people recognizing each other by touching each other’s face or whispering to eachother. Cells likewise, have 2 pairing proteins. If these two proteins find each other (protein A from cell 1 and protein B from cell 2), both cells or one cell sense(s) the presence of the other cell. Sometimes, they react to this information. One particularly interesting case is when innate immune systems cells such as dendritic cells present antigens to the adaptive immune system. During this process (immunological synapse), many proteins on both cells bind each other and interact. This provides plenty of necessary information to the adaptive immune system. Another interesting case is the Fas ligand/Fas interaction. This is the way some immune cells tell other (possibly nonimmune) cells to simply kill themselves. Yes, you read it right. Cells sometimes instead of killing other cells, they tell them to kill themselves. This process of cell suicide is apoptosis. Many cells before turning into cancer cells do this to prevent cancer. Also the same mechanism plays an important role in resolution of immune cell expansion, by which lymphocytes are programmed to die after they are no longer needed. Amazing right? There are many such interesting interactions between cells. Too long to go through all of them. 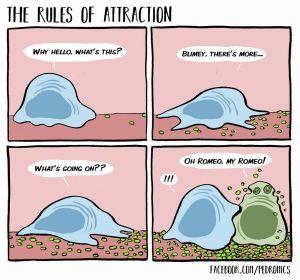 But I have to mention some other scenarios. Some cells talk to themselves “and it is completely normal and healthy, no need to be ashamed of it”. This can happen in two ways, some signaling molecule is produced but it directly effects the same cell (like inner thoughts). Also, this molecule can be secreted (leaves the cell) but immediately captured by the receptors of the same cell. This is more like that guy who was talking out loud in the bus “this morning”. These are called intracrine and autocrine signaling. One important example is interferon signaling. Interferons are important (particularly nowadays during COVID outbreak) against viral infections. They have been discovered to interfere with viral replication. They were later discovered to also prepare cells against viral infection. During a viral infection, cells produce these molecules to tell other cells to watch out! This is why I love immunology.

Another interesting way of communication is exosomes. These are vesicles (tiny membrane bound drops) released by cells, which can contain many other molecules. They are less well known compared to other methods I mentioned but are heavily studied for their potential importance for immunology and cancer biology. You can imagine these as small packages of information left behind.

About the Author: Saren Tasciyan

Hi, I’m Saren Tasciyan or Taşçıyan or Թաշճեան. I am split between science and technology. I love switching between science and technology. I studied immunology and infection biology. Currently, I am doing my PhD in cancer cell migration and biophysics at Institute of Science and Technology Austria. For my project I develop microfluidic devices and do lot’s of live cell imaging and image analysis (ImageJ macros, machine learning and R). As a side project I developed an application to analyze particle tracking data for end users. In my free time, I make 3D designs, print them, put some electronics in it, make software, try to hack stuff. I have been learning about 3D printing since 6-7 years and electronics since 4-5 years. Besides, I like to play and extract meaning out of data. A long while ago I have made a software to catch lightnings. You can find those photos on my FlickR page. During my university years, I started a business on the side to provide a variety of IT solutions mostly to science related entities. Feel free to contact me if you want to chat about that.