STAT3 is constitutively active in a number of cancers, comprising a promising anticancer target. This project identified a novel, small molecule STAT3 inhibitor, VS-43, which efficiently downregulates the cellular levels of pSTAT3 in cancer cells, induces apoptosis, synergises with chemotherapy and radiation, and restores cellular sensitivity in resistant cells.

Signal transducer and activator of transcription 3 (STAT3), is constitutively active in a number of cancers and is implicated in critical cellular processes for tumour development and growth such as cell proliferation, survival, immune evasion, angiogenesis and metastasis. A series of curcumin analogues have been designed, synthesised and evaluated and the lead compound, VS-43, is currently being developed at the University of Vienna, in collaboration with Prof. Moses Lee (Georgia State University, USA) and Prof. John Hartley (UCL, London, UK). VS-43 comprises a novel, small molecule, direct inhibitor which selectively targets STAT3, and effectively downregulates the cellular levels of constitutively active or cytokine-inducible STAT3 in a number of cancer cell lines, ultimately inducing apoptosis. Key downstream STAT3-target genes involved in cell proliferation, apoptosis and stemness, responsible for promoting the malignant potential, are all markedly downregulated. The in vitro STAT3 inhibitory effect of VS-43 and its resulting cytoxic activity have been shown both in monolayer cultures of prostate, ovarian, colorectal and non-small cell lung cancer cells as well as in the corresponding 3D tumour spheroids. 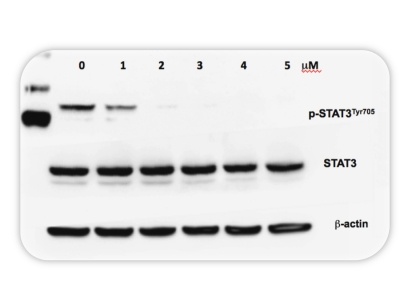 DNA damaging agents continue to be the mainstay in clinically used chemotherapeutic regimens, either as single agents or in combination with e.g. molecular targeted therapeutics. The University of Vienna has successfully shown that STAT3 inhibition, conferred by a number of chemically diverse small molecule inhibitors, sensitises cancer cells to the DNA damaging effects of both chemotherapy (e.g. cisplatin) and radiation. VS-43 in particular, has been shown to synergistically interact with cisplatin, displaying a higher degree of synergy compared to the other inhibitors tested. This synergistic interaction was attributed to the impairment of the repair of the cisplatin-produced DNA interstrand crosslinks. The VS-43-mediated STAT3 inhibition, appears to modulate the DNA repair of these critical cytotoxic lesions, leading to increased DNA damage response and enhanced apoptosis, providing for the first time an adduct-specific mechanistic insight for the potentiation of the activity of the platinum drug.

STAT3 has also been identified as a key mediator of resistance to both conventional cytotoxic chemotherapy but also to pathway-targeted therapies, through feedback activation. Redefining the cellular context of our chemosensitisation studies, VS-43 is currenty being investigated in combination with clinically used platinum drugs (cisplatin, oxaliplatin) in paired cell lines of sensitive and resistant phenotypes, in both monolayers and 3D cultures. VS-43 synergises with the chemotherapy drugs, restores the sensitivity of highly resistant cells and enhances apoptosis in the combination setting.