Novel drug candidates for treatment of sepsis and lung edema

The goal of this project is developing a new drug for treatment of sepsis and lung edema. The lead molecules are based on a new chemical scaffold and demonstrate multiple beneficial pharmacological activities such as inhibition of systemic inflammation and prevention of fluid accumulation in lungs. 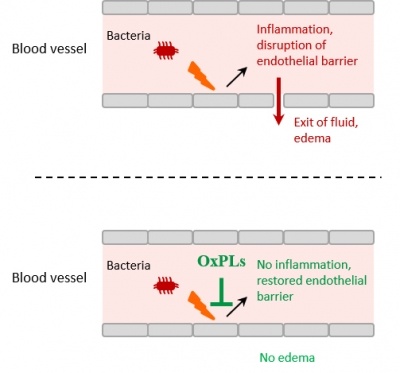 This project is based on an unexpected discovery of natural molecules that demonstrate anti-inflammatory properties and also prevent leakage of fluid from lung vessels, which may result in life-threatening edema. These protective molecules have a chemical scaffold of oxidized phospholipids (OxPLs), namely phospholipids containing one normal saturated fatty acid residue and one polyunsaturated fatty acid residue modified by oxidation. We have found that OxPLs demonstrate several protective activities in vitro and in vivo. The major anti-inflammatory effect of OxPLs results from their ability to antagonize Toll-like receptors (TLR) 4 and 2. These are the major sensors of bacteria responsible for initiating inflammation by Gram-negative (TLR4) or Gram-positive (TLR2) microorganisms. Overstimulation of TLRs during sepsis leads to development of systemic inflammatory syndrome (SIRS) and acute respiratory distress syndrome (ARDS). In the majority of patients sepsis is initiated by multiple bacterial species and therefore the ability of OxPLs to target the action of both Gram-positive and Gram-negative microorganisms may be especially effective in clinics. Importantly, no small molecules with a dual TLRs specificity are currently available.

Another beneficial effect of OxPLs is their ability to improve barrier function of endothelium in lung vessels. By doing that, they prevent disruption of the barrier by inflammatory and edemagenic agents such as tumor necrosis factor, bacterial lipopolysaccharide or thrombin. We have identified and synthesized individual molecules based on the OxPL scaffold that prevent edema induced by a variety of edemagenic agents. Importantly, the barrier-protective effects of OxPLs are as strong as the action of the best currently available barrier-enhancing drugs, but have an advantage of much longer action. Mechanisms of barrier-protective effects were described by us in multiple publications and involve several cell-surface receptors and intracellular signal transduction pathways. Importantly, no small molecules with similar polypharmacologic action are currently known.

The two beneficial activities of OxPLs, namely their ability to inhibit bacterial inflammation and protect endothelial barrier were confirmed in several animal models. The in vivo experiments have shown that the action of OxPLs was strong enough to protect mice from systemic inflammation, lung edema and death induced by lethal doses of bacterial lipopolysaccharide and other inducers of inflammation and lung edema.

Our groups identified the most active molecular species of OxPLs demonstrating simultaneously the anti-Toll-like-receptor and anti-edemagenic activities. Currently, several individual synthetic molecules are available for experimentation. An important chemical modification has been done in the OxPL-scaffold in order to increase its stability in vivo. To this end, alternative chemical bonds linking fatty acid residues to the glycerol backbone were introduced. The modified bonds make the molecules resistant to phospholipases A1 and A2. In addition to higher biostability, these modifications simplify the synthetic process, significantly reduce time and effort required for synthesis and thus give an advantage of faster development of further derivatives as compared to common physiological phospholipids.

In summary, this project addresses unmet clinical needs in therapy of polybacterial sepsis and lung edema. The unique solution suggested by this project is a beneficial polypharmacology of lead compounds, which can simultaneously inhibit two major TLRs and enhance barrier function of lung vessels in vitro and in preclinical laboratory in vivo models.